“Keris” is an ancient traditional Malay weapon, often although not necessarily with a wavy blade, damascened with beautiful patterns forged into the steel with a stylized, carved hilt of wood.

The Origin of Keris

The origins of the keris vary in evidence, but the early keris weapons point to the 14th century, where its earliest depictions are found in the candi (temples) of the Majapahit kingdom, Java. The names it carried were Sanskrit-derived, reflective of the kingdom’s Hindu antecedents. When the Majapahit Empire fell apart, its Empu or pandai besi (keris master craftsmen) migrated elsewhere in Indonesia, setting up new enclaves and pledging allegiance to minor rulers. Some went to the West Sumatran palace of Pagar Ruyong and eventually found their way to Terengganu and Kelantan. Some however say that Hang Tuah, a 15thcentury hero from Malacca introduced the keris to Malaysia. His keris was special, as it was apparently made of twenty types of iron. 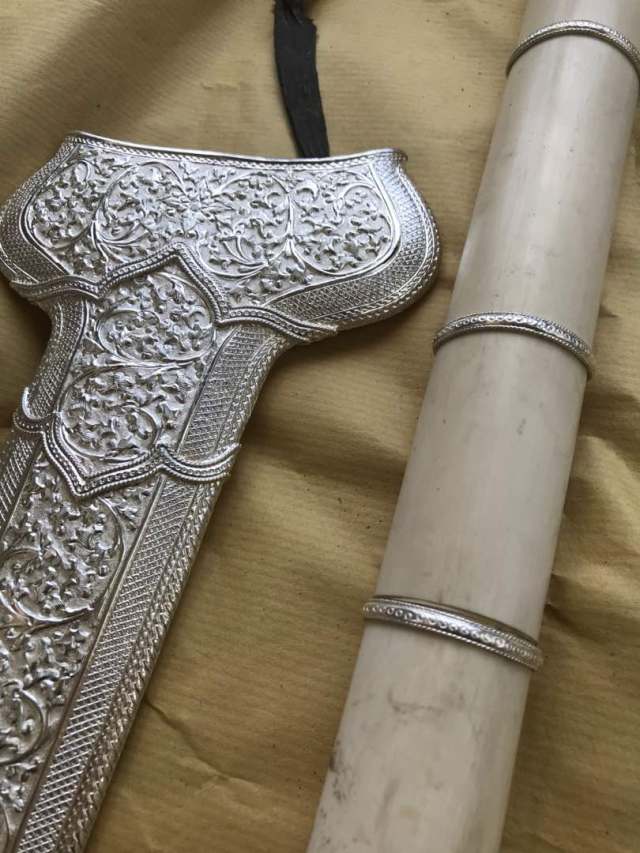 During my recent visit to Kelantan, I visited a few keris makers who enlightened me further on this ancient craft.  Being a Kelantanese, I grew up with the keris around me as my uncle was a keris collector and my grand uncle was an antique dealer including antique keris. I grew up with stories about the magical properties of certain types of keris including the ability to fly.  By sheer coincidence, my husband is an avid collector of the keris and other ancient weapons! There are many fascinating stories about the keris, but more importantly, I wanted to share the recent experience I had with the keris makers of Kelantan. It was to my pleasant surprise that the keris makers I met were as young as 19 years old – there were also the more seasoned master craftsmen who have had over 20 years experience making the keris.

The blade of keris is made by skillfully forging various types and grades of metal – iron, nickel and steel usually – into a blade of between 30 and 38cm in length. A keris may be straight-bladed or wavy; the latter must have an uneven number of luk (curves), ranging from at least five to 47. The minimum requirement of five represents the basic pillar of Islam according to the keris maker I spoke to. Apparently, the older the iron, the better the keris will be. To my surprise, the young 19-year old keris maker was explaining how the blade of the keris he was making came from amongst other things, the old, discarded railway tracks in Malaysia. In Indonesia, sometimes steel was extracted from old Dutch bicycles, and at one time when it became available, even meteorite. 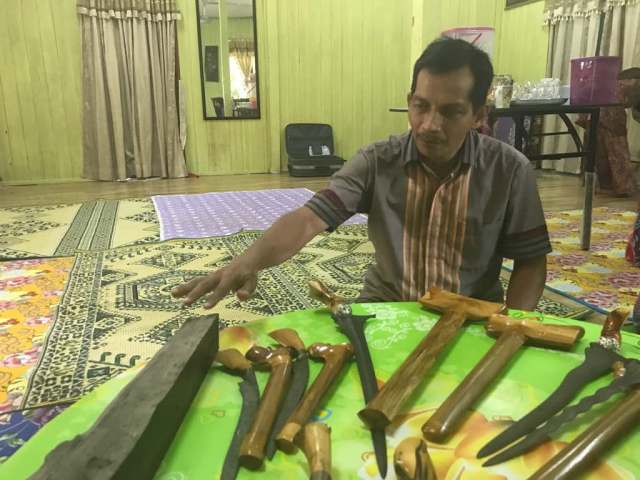 The Spirit of Wood

The hilt of the keris may be made of carved wood, horn or ivory, and embellished with a band of silver or gold. The keris makers I spoke to spoke very highly of Kemuning wood. According to the Kelantanese keris makers, the Kemuning wood that came from Gua Musang was the best quality. When asked why, they explained that the Kemuning tree in Gua Musang grew out of rocks or boulders, and thus became very strong. They also have unique properties – the wooden grains are very distinctive because of the way the roots shape and grow. The Kemuning wood that is black in colour apparently has health properties if one were to drink it like tea. Clearly, the type of wood used is crucial for the keris, and forms part of the weapon’s beauty and heritage.

The master woodcarver of Kelantan, the late Nik Rashiddin Nik Hussein created an exhibition called “The Spirit of Wood” on the history and philosophy of Malay woodcarving – displaying amongst others his exquisite carvings on the hilts of the keris.

The exhibition was also shown at the Asian Civilisation Museum of Singapore and later in London, at the Brunei Gallery of The School of Oriental and Asian Studies. He sought to show that Malay woodcarving has a distinct regional style, composed from the varied cultural and religious fabric of South East Asia.

A Craft by Calling

So how does the design come to mind? In the old days, it is said that the “Empu” or master craftsmen or craftswomen would usually go into a spiritual state of prayer, fasting and meditation before he embarks on making a new keris. The inspiration will at times come in a dream. When asked why and how he decided to take up crafting the keris, the 19 year old keris maker told me simply, “It was my calling. I felt very strongly in my heart that I should do it.” 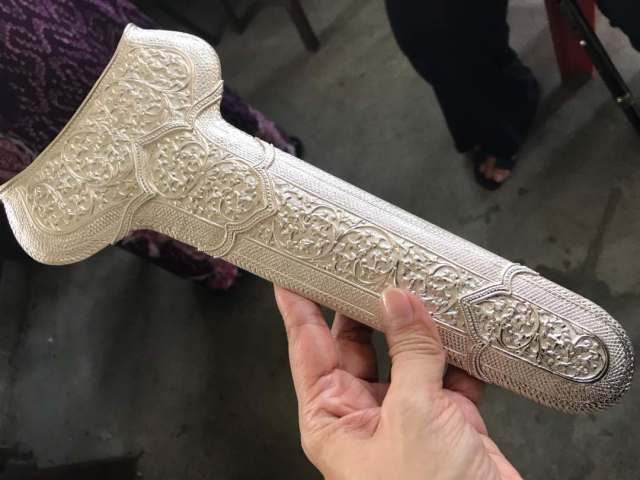 The final step for crafting a fancy keris for ceremonial purposes is the embellishment of silver and gold on the keris. It can be rather elaborate, with traditional motifs. The skillful Kelantanese silversmiths and goldsmiths are complementary to the keris makers – they embellish the hilt or the scabbard. They were and still are accustomed to crafting embellishments on the keris especially for royalty, collectors or for ceremonial purposes. In the old days, only royalty may own keris hilts made entirely of silver or gold.

Nowadays, the keris is either considered as collectibles or used for ceremonial purposes. However, especially in Malay homes and culture, the keris is treated with respect and preserved with care as they will always be associated with a unique Malay heritage that is imbued with mysticism, magic, nobility and spirit.

Note: For further reading, information for this article was extracted from Suhaini Azman’s article ” Blade of Power and Traditions”  and Edward Frey’s book “The Kris – Mystic Weapon of the Malay World.”