On a trip to attend an art exhibition in Seoul recently, I discovered parts of this huge city that were delightful to someone who likes to walk, loves art, history and traditional craft.

The art exhibition I attended was located in one of the most attractive areas in Seoul, which otherwise resembles a modern, concrete jungle. Samcheong-dong is flanked by two royal palaces from the Joseon Dynasty – Gyeongbokgung palace and Changdeokgung Palace. The Joseon dynasty lasted 5 centuries from the 14th to the 19thcentury and has left a substantial legacy to modern Korea.

Most of modern Korean culture, etiquette, norms and societal norms developed during this period. The modern Korean language, its dialects derive from the culture and traditions of Joseon. 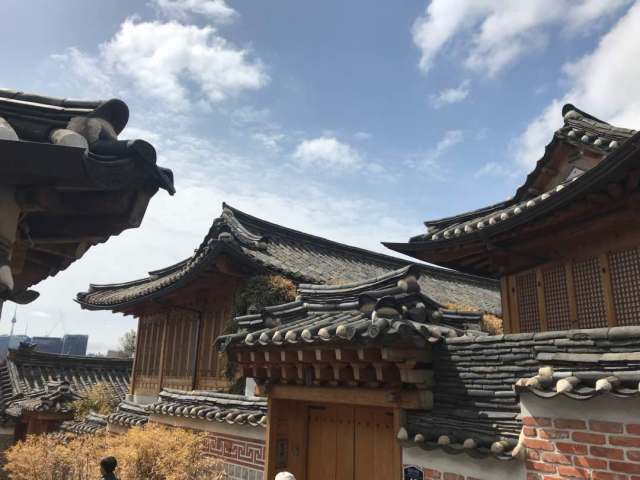 In stark contrast to the center of the Seoul which is full of high rises, shopping centers and huge roads filled with cars, Samcheong-Dong has mountains, blossom trees as well as the Bukchon Hanok, the traditional wooden Korean houses.

Sam which means “three” and cheong “clean or good”,  was given its name in reference to the three things it is said  to have in abundance: clean water, beautiful neighboring mountains and kind-hearted residents.

A stroll through Bukchon and Samcheong-Dong revealed a distinctive neighbourhood full of not just traditional Korean culture, but also contemporary art. We were there in late March recently, and witnessed the grounds of the royal palace gardens  overtaken by enthusiastic local and foreign tourists (undoubtedly avid fans of Korean soap operas) dressed up in Korean traditional costumes to take pictures against the picturesque backdrop of the traditional Korean palaces and the pink spring blossom trees – it was like being in a period Korean drama film set.

On the other hand, the national Korean contemporary art museum, The Jewellery Museum and numerous other museums have mushroomed in Samcheong-Dong. Art galleries, craft shops and specialty food cafes have set up in this neighbourhood, adding to its considerable charm. 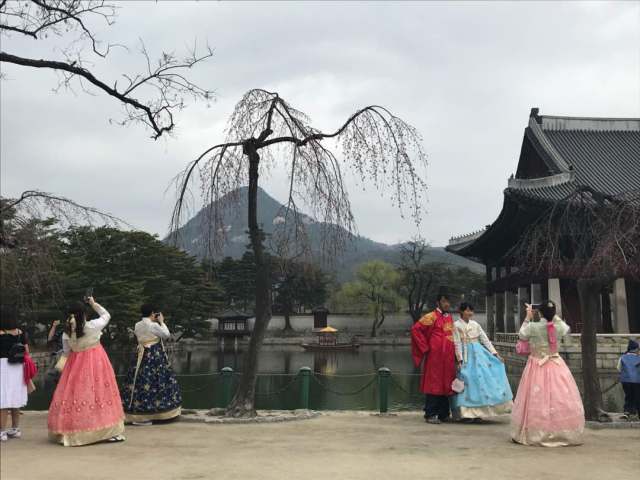 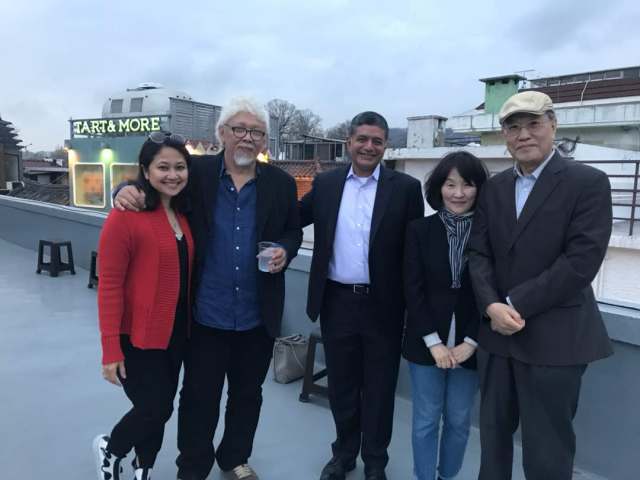 Our first stop was the main reason for our trip, which was a solo exhibition of Malaysian artist Ahmad Zakii Anwar at Baik Gallery. Baik Gallery is an art gallery from Los Angeles that has now set up a second branch in Seoul. The gallery was located around the corner from the Prime Minister’s residence which meant it had a lot of free security, and right across is the famous MILK COW bun and milk shop which sells a variety of soft but square milk buns with fillings like chestnut and red bean, and special milk tea in square bottles. So the location of the gallery was excellent in many ways than one. The art opening was interesting as we had mostly Korean visitors who were art collectors or art lovers, but the very friendly Malaysian deputy High Commissioner attended too. Many were intrigued by Malaysian art. I noticed that art spaces and museums are very well attended by Korean themselves. They have a strong respect for art, culture and tradition. Contemporary art seems to be thriving in Korea. The major Korean conglomerates such as Samsung and Hyundai have already set up private galleries showcasing their considerable art collections to the public.

In another gallery in Samcheong-Dong, we discovered the exhibition of  artist and  craftsman Ernst Gamperl who won the Loewe Craft Award 2017. He made wooden bowls from fallen trees, and these exquisite bowls were displayed in a modern gallery designed by a Korean architect that felt like a traditional house with its integration of the nature, light and the outdoors. I was awestruck with admiration with the space as well as the masterful craftsmanship of the wooden bowls.

Further up the hill just below one of the palaces, we were fortunate to visit a private ceramic gallery and showroom, LVS crafts. I fell in love with Korean ceramics. Ranging from traditional shapes in restrained white or pale green glazing to ceramic pieces in odd, fantastic shapes colours and textures, Korean ceramic artists have pushed the craft towards creating ceramic artworks which are original and highly creative.

Freshly inspired by Seoul and its pleasant contradictions between modernity and traditional creativity, I returned home with a new set of eyes through which I could view our very own artisanal creations. 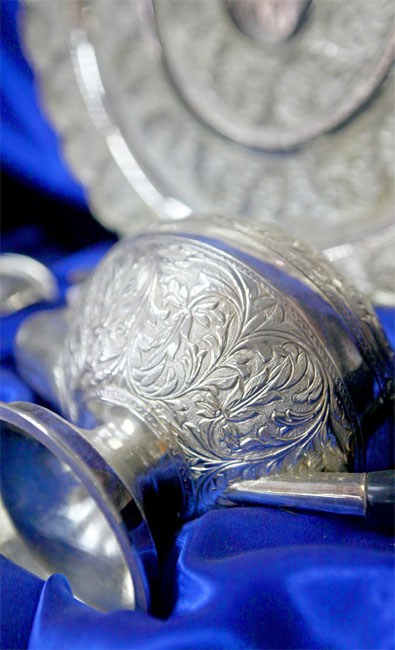 Kelantan is the north-eastern Malaysian state where I was born. As a state, Kelantan is known to be one of the most culturally rich in Malaysia, and it has had centuries of royal history, which shaped its traditions, arts and crafts. It was linked to the 15th century Pattani kingdom as well as the ancient 2nd century Langkasuka kingdom with ties to the Cambodian and Thai kingdoms. END_OF_DOCUMENT_TOKEN_TO_BE_REPLACED